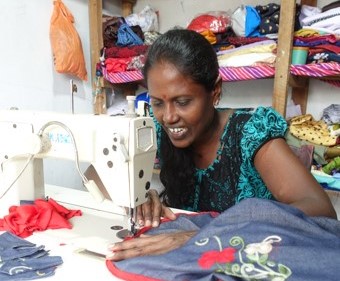 Much of the North of Sri Lanka was devastated during 30 years of civil war that ended in 2009. The Tamil Tigers, an armed insurgent group of the Tamil minority, fought the Sri Lankan army. Civilians bore the major burden of the conflict; the UN estimates that 40,000 were killed and many more displaced. Many families were forcefully displaced multiple times. Reconstruction and resettlement continue as the region still remains underdeveloped today. Most families were affected by the war and the psychological scars of violence and lasting dispersion of families remain visible today. There are distressed families, war widows, disabled people and adults who have suffered traumatic experiences in their childhood.

ECLOF was among the first microfinance institutions that started serving the area with loans and training back in 2012. One of ECLOF’s clients is Mrs. Christy Mariyai from Alankulam village. She runs a small shop in a container next to her house where she sews dresses, sari blouses, and school uniforms. Christy is married and has five children. Her husband cannot work for health problems that are an effect of the war.

Between 2006 and 2009 the family was displaced and had to live in dozens of different camps. Christy found herself sleeping in bunkers and fleeing from shelling through muddy rice fields with a baby on her arm. One of her boys did not speak for years after witnessing the horrors of war.

But wherever Christy ended up, she unpacked her sewing machine and started to sew and sell the products to survive. Finally in 2009, the family re-settled in their home village. Using loans from ECLOF, Christy purchased raw material and later bought a container to work in. Today she employs two local women to help with sewing and sales.

With the money earned from the business and a grant from Caritas, they managed to rebuild their house. The children attend school and the family enjoys a life in dignity.

Weathering the Covid crisis: effects on clients and the ECLOF network
Scroll to top