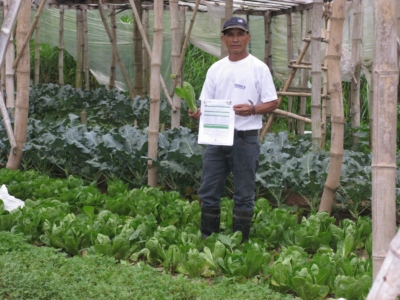 Dec 1, 2015 – Mr. Marines Takingan is an organic farmer from Benguet who’s been a client of ECLOF Philippines for 10 years. During that time he grew his family’s cutflower business and built an organic vegetable farm.

Having practiced conventional farming for many years, one day in 2006 Mr. Takingan was diagnosed with severe respiratory problems which were attributed to the prolonged use of chemical pesticides and fertilizers. After recovery, he decided to turn to organic farming techniques that use natural methods and chemical-free pesticides and fertilizers safe both to the farmer and the consumer.

Nowadays his organic farm grows broccoli, beans, lettuce, romaine and spinach. The produce is regularly sold to the La Trinidad Organic Practitioners Association, an organization of farmers who practice organic farming, and to traders who sell the vegetables in Manila.

For his convictions, Mr. Takingan is a volunteer and ambassador advocating organic farming in his community. He regularly shares his knowledge on organic agriculture with other farmers in the community and willingly supports those practicing it. He also ensures the quality of items sold as a product inspector for the local Organic Practitioners Association.

Nominated by ECLOF and selected among a nation-wide host of applicants by the Philippine Central Bank, Citi Bank and the Microfinance Council of the Philippines, Mr. Takingan received his cash prize of 100,000 pesos, a laptop and free enrollment into an entrepreneurship training course. He’s already decided to invest part of the prize money into a shredder which can be used by other farmers in the community.

ECLOF Philippines is happy and proud to be a partner to his organic farming business and will continue supporting farmers like him.